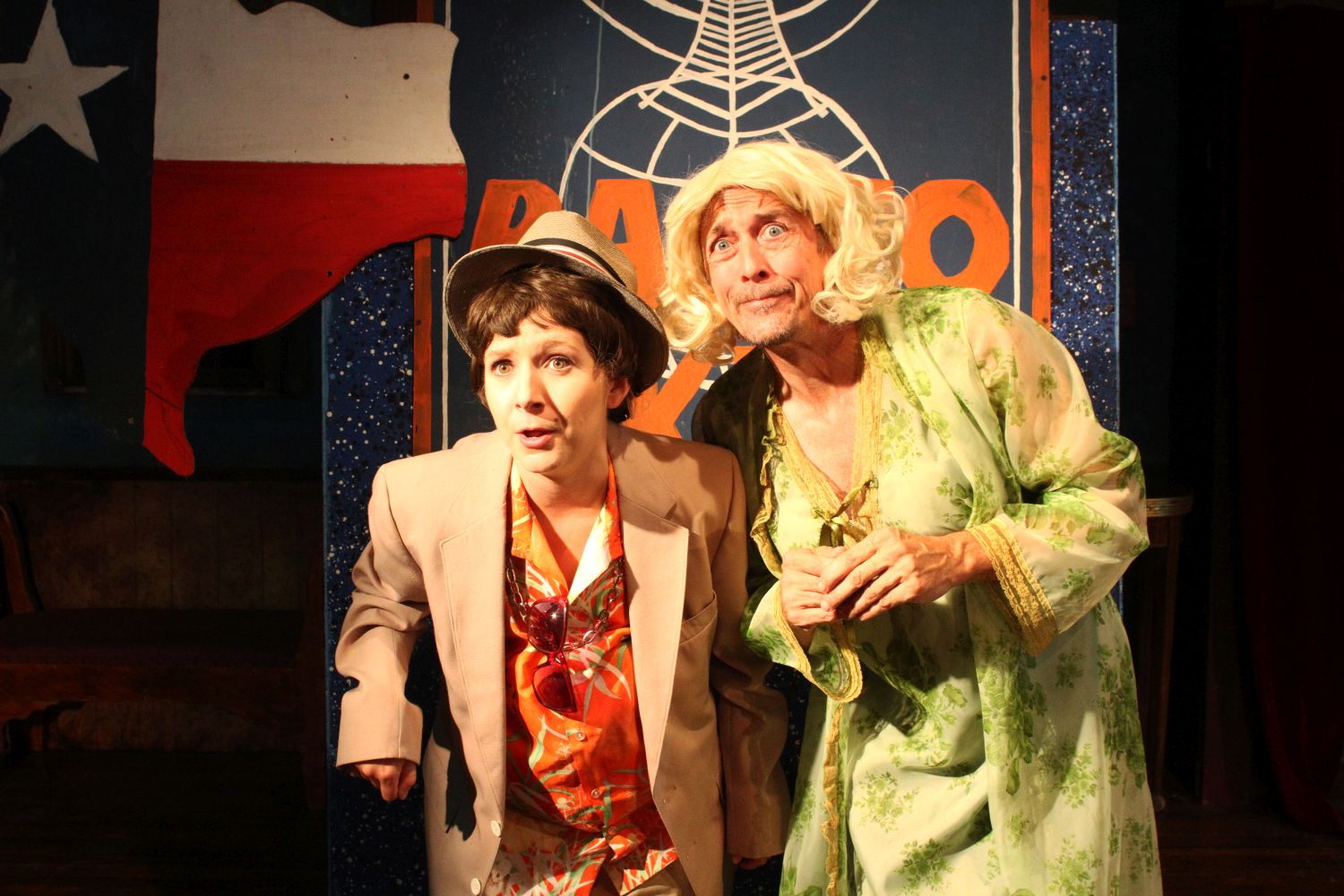 Pioneer Playhouse, Kentucky’s oldest outdoor theatre, ends its regular 2019 play season with Red, White and Tuna, a hilarious comedy set in the fictional “third smallest town” in Texas, which is populated by an eccentric cast of characters, all connected through the airwaves of the hometown radio station, OKKK and its DJs, Arles Struvie’s and Thurston Wheelis’ constant comment on local happenings.

“The plays work as a series, but they’re also complete stand-alones,” says Heather Henson, managing director of Pioneer Playhouse, which has been celebrating 70 years in the Bluegrass this summer. “Don’t worry if you haven’t seen the other plays. It doesn’t matter at all. Each play has its own plot, its own big event that the residents of Tuna, Texas are all worked up about.”

Red, White and Tuna was written by a team of playwrights, Ed Howard, Joe Sears, and Jaston Williams, and is the third in a series of four “Tuna” plays which are both an affectionate look and satirical comment on Southern small-town life and attitudes. Pioneer Playhouse has previously presented two of the “Tuna” plays in years past: Greater Tuna and Tuna Does Vegas.

As the title suggests, Red, White and Tuna is set in the week leading up to the big Fourth of July celebration, which happens to coincide with the big Tuna High School reunion. Both events have all the Tuna townsfolk in an increasingly frenzied state of anticipation.

As with all the “Tuna” plays, two actors play the entire ensemble of kooky residents in a rapid-fire series of quick-change scenes and costumes.

“If you’ve been coming to the Playhouse for a while then you know actor, Daniel Hall Kuhn,” says Robby Henson, artistic director of Pioneer Playhouse. “He’s a fan favorite, and audiences always ask when he’s coming back. Well, he’s back with a vengeance in this one.”

“Daniel was one of the two actors the last time we did a ‘Tuna’ play,” says Heather. “He was in Tuna Does Vegas, and audiences loved him. They couldn’t stop laughing at all the different characters – both men and women – he played.”

“And this time we’re doing something a little different,” adds Robby. “We have Daniel back, but we are changing things up a bit, and having an actress play the other traditionally male role.”

Meg Mark, who debuted at Pioneer Playhouse over ten years ago in Pioneer Playhouse’s very first “Kentucky Voices” production, A Jarful of Fireflies by local writer Catherine Bush, returns to the historic stage to play opposite Kuhn in the demanding 20-odd character comedy.

“Meg was here when she was just starting out,” says Heather.  “And she returned about seven years ago, and audiences loved her in Dracula Bites and Picasso at the Lapin Agile. She’s been working in New York City, acting and doing stand-up comedy. She’s funny, with great energy and crazy comedic timing. We’re incredibly lucky to have her return.”

“It’ll be fun to see Daniel Hall Kuhn and Meg Mark working together again,” says Robby. “These are two actors at the very top of their game. You’re not going to want to miss one.”

Red, White and Tuna is directed by Drew Davidson. It opens on August 6 and runs through August 17, nightly, Tuesdays through Saturdays at 8:30 pm. A home-cooked BBQ dinner featuring pulled pork or pulled chicken, parmesan roasted potatoes, coleslaw, cornbread, and fruit cobbler is available at 7:30 before the show. Reservations are suggested for the play; required for dinner.